A food allergy can be triggered by a wide variety of foods, but some food sources are more common triggers than others. According to Food Allergy Research & Education (FARE), there are eight major food allergens responsible for 90% of serious food allergy reactions in the United States. These eight food allergens are known as “the big 8”.

Cow’s milk is responsible for most food allergies in infants. The good news is that of the 2-6% of young children who suffer from milk allergy, 90% outgrow this allergy by the age of six.

The symptoms of milk allergy typically include hives, congestion, cramps, nausea, and vomiting. Milk allergy is triggered by two different milk proteins, casein, and whey. Many products contain these proteins, such as butter, cheese, custards, sour cream, yogurts, ice cream, and many more.

A true milk allergy is different to lactose intolerance, where a patient is not allergic to a milk protein but lacks enough of the enzyme lactase which is needed to properly digest the lactose in milk.

Like cow’s milk, egg is a very common trigger for food allergies during childhood. Egg allergy is also often outgrown by the age of six. Egg proteins are similar in different bird species, such as hens, geese, and ducks. Therefore, it is possible that a hen’s egg allergy patient would also react allergic to proteins of other birds’ eggs.

Symptoms associated with egg allergy include hives, congestion, cramps, nausea, and vomiting. The proteins responsible for major allergic reactions are usually those found in the egg white. It is very seldom that proteins from the egg yolk trigger allergic reactions.

There is a huge variety of everyday food products containing egg allergens, such as pasta, mayonnaise, salad dressings, crepes, waffles, custards, marshmallows, meatballs, soufflés, meringue, frosting, some soups, some wines, and many more. 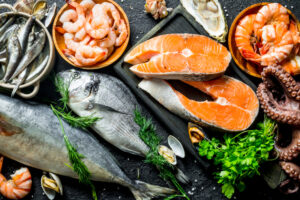 Fish allergies are more common in adults than they are in children. Sometimes patients will react to only a certain type of fish, sometimes all kinds of fish can cause allergy symptoms. The type of sensitizationSensitization is the first step towards developing a type I allergy. Allergic reactions do not occur upon first contact with an allergen. Before that can happen, your immune system must be able to recognize an allergen. When you get stung by a bee, your immune system will remember the structure of the allergen (= a protein in the insect venom) to be able to produce IgE antibodies against it in the future. This process is called sensitization. usually depends on the fish species available to people in different parts of the world.

The protein in fish patients most commonly react to is called parvalbumin. Parvalbumin is resistant to heat, which means that cooking does not destroy the allergenic protein, and allergic patients will have a reaction regardless of whether they eat the fish raw or cooked. Symptoms include skin rashes, as well as runny nose, sneezing, or asthma symptoms.

Like fish allergies, shellfish allergies are also more common in adult patients than in children. There are many types of shellfish that can cause allergic reactions, including shrimp, lobster, crab, crayfish, oysters, mussels, clams, and scallops. Many patients showing reactions to one type of shellfish often react to other types as well.

Shellfish allergy typically manifests through vomiting, wheezing, skin rashes, and even anaphylaxisA severe, potentially life-threatening allergic reaction that can lead to a potentially fatal condition known as anaphylactic shock. It can occur within minutes or several hours after coming into contact with an allergen and is often caused by reactions to medication, food allergens or insect venom.. In some cases, inhaling the cooking vapors of shellfish is enough to trigger a reaction.

Here are some international foods and dishes that often contain shellfish: bouillabaisse, paella, 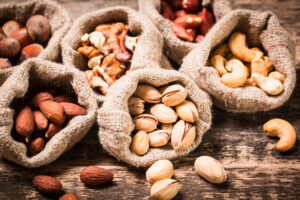 Tree nut allergies usually persist throughout a patient’s life and are the most frequent reason for food-induced anaphylaxis, next to shellfish and peanut allergies. The following nuts are most likely to cause an allergic reaction: cashews, pistachios, hazelnuts, Brazil nuts, almonds, pecans, and walnuts.

Tree nuts can cause allergic symptoms such as hives, vomiting, difficulty swallowing, and low blood pressure, up to anaphylaxis.

Peanuts are one of the most common causes for food allergies in children and adults. It is possible that children outgrow peanut allergies as they age, though most peanut allergy patients are more likely to be allergic for all their lives.

Despite their name, peanuts are not part of the tree nut category – they are members of the legume family. Regardless, peanut allergy patients may also be allergic to tree nuts.

Wheat allergy is another common food allergy in children. However, chances are high (65%) that children will outgrow wheat allergies by the age of twelve. A wheat allergy is not the same as a gluten intolerance, though one of the main allergens in wheat is the protein gliadin, which is also found in gluten. Symptoms of wheat allergy include digestive problems, asthmatic symptoms, as well as skin symptoms such as rashes.