Who doesn’t enjoy a nice glass of wine in the evening? But do you ever experience your skin flushing or sneezing fits after drinking? If this sounds familiar to you, you might want to overthink your drinking habits.

Research has shown that even if you aren’t truly allergic to the compounds of alcohol itself, drinking it can have a negative effect on your persisting allergy symptoms, such as sneezing and coughing. The effect of drinking alcohol has been linked to various allergy symptoms, for example sneezing, coughing, itching, hives, nasal symptoms, headaches, and asthma.

The American Academy of Allergy Asthma & Immunology (AAAI) reports that drinking alcohol is linked to allergies in the following ways:

Can you be allergic to alcohol itself? 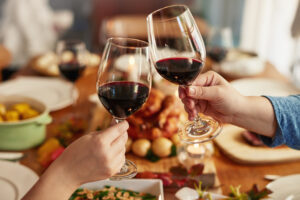 While it’s possible to experience an allergic reaction to alcohol itself, a true alcohol allergy is very rare. For a German study published in 2012, 4.000 randomly chosen participants were asked to fill out a questionnaire about their alcohol intake and the occurrence of intolerance reactions and allergy-like symptoms after drinking wine.

Of these 4.000 participants, 68 (7.2.%) reported allergy-like symptoms after drinking wine. The most reported reactions to wine were skin symptoms such as flushing and itching, as well as nasal congestion. On the other hand, a true alcohol allergy would manifest as abdominal pain, cramping, fainting, breathing difficulties, and even life-threatening anaphylaxisA severe, potentially life-threatening allergic reaction that can lead to a potentially fatal condition known as anaphylactic shock. It can occur within minutes or several hours after coming into contact with an allergen and is often caused by reactions to medication, food allergens or insect venom.. A medically diagnosed allergy was only present in two of the 68 participants.

The study concluded that immunologically mediated allergy to alcohol is rare, and that people reporting symptoms are rather experiencing an intolerance or sensitivity reaction to alcohol as opposed to a full-blown allergy.

HistamineAn organic compound involved in local immune responses. During an allergic reaction, the immune system starts a chain reaction that prompts the body's mast cells to release histamine. This process causes typical allergy symptoms such as sneezing, itchy eyes, or a runny nose. is a chemical compound that occurs naturally in different kinds of food items, especially aged or fermented ones, such as cultured milk and yoghurt, miso, kimchi, sauerkraut, as well as alcoholic beverages like wine, beer, and cider.

Consuming foods that are high in histamine can have a negative impact on allergy symptoms, as they increase inflammation in the body. An allergy patient already struggling with hay fever symptoms might therefore experience even worse symptoms after drinking.

Other compounds of alcoholic drinks, such as sulfites (a common preservative in wine), or a high sugar content (think of certain cocktails), can also act inflammatory and potentially make allergy symptoms worse. If you experience allergy-like symptoms such as an itchy throat and nasal congestion after drinking wine, the sulfites in it might be the culprit.

Some allergy patients notice a worsening of their asthma symptoms after drinking wine, which might be connected to the high level of sulfites and histamine in wine. Experts suggest that allergic asthma patients should always drink in moderation. Red wine has less sulfites than white wine, but white wine has less histamine that red wine. Depending on what compound your body reacts to, one variety might be better for you than the other.

Depending on your drink of choice, certain compounds might lead to intolerance reactions. Take beer as an example: it usually contains gluten, yeast, and hops. If you are sensitive to any of these compounds, you might experience allergy-like symptoms after drinking a few beers.

Another example is aged alcohol that’s stored in wooden barrels. A patient allergic or intolerant to tree nuts might experience reactions after drinking aged alcohol.

An allergy or intolerance to milk, egg, or fish may also cause reactions after consuming wine, as these ingredients are often contained in wine to improve the coloring and clarity of the liquid.

Unexplained symptoms in your body can be connected to underlying allergies or food intolerances. Get the ALL FIT combination test package and gain insight into your body’s health status!